Fred Senti is a 45 year member of the Lakeview Fire District in Nassau County.  Fred had been very active in the fire service as former Chairman of the Fourth Battalion Fire District, Past Chief of Lakeview, Commissioner for 30 years and a 21 year member of the Long Island Law & Legislative Committee serving as both Chairman and Co-Chairman.  Fred was also past president of the Executive Council of the Firematic Organizations of Nassau County.  In 1994 Fred served as the Director of the Association of Fire Districts of Nassau County and as President of the County Association in 1999.  For 12 years Fred has served as Region 8 Director for the Association of Fire Districts of the State of New York as well as 2nd Vice President.  In his professional career, Fred served 32 years in the Unified Court System, as Court Officer, Senior Court Officer, Senior Court Clerk, Deputy Commissioner of Jurors of Nassau County and Court Management Analyst.  Fred resides in West Hemstead, NY with his wife Debra and is proud of both his son and daughter who have followed in Dad's footsteps in the fire service. (8/18)

Ken Preston is a 55 year member of the North Greece Fire District, having served thirty two years as Commissioner.  During his tenure as a Commissioner,  he assisted in developing one of the largest combination fire departments in Monroe County, consisting of 47 career and 60 volunteers firefighters, with an annual budget over eight million dollars.  He is past President of the Fire Department, past President of the Monroe County Fire District Officers Association and served as Treasurer for seventeen years. He is also a member of the Town of Greece Fire Council.  He is a current member and past president of the Western New York Law and Legislative Association.  Ken has served as a Director of Region 5  in the Association of Fire Districts of the State of New York for the past 10 years.  As a Director, he has chaired the Administration/Policy Committee, the Audit Committee, and the Education Committee. heir daughter, Tammy, lives nearby in Greece, and their son Todd lives in Highland, Michigan.  Their five grand children are very active in school sports and plays, which are frequently attended by their proud grandparents. (8/18)


Tom Rinaldi is a 49 year member of the fire service, a past chief, Saratoga County Fire Advisory Board  member and currently a third term Commissioner with Stillwater Fire District, in Saratoga County, NY.  He holds a bachelor's degree in public administratiory College, Rockville Maryland.  Tom has served with volunteer and career departments in Maryland and New York.  In 2010 Tom retired from the NYS Office of n from Niagara University and a Certificate of Fire Science from Montgomery Emergency Management and is currently employed by Chazen Engineering as a Senior Code Analyst for the Town of Malta at the $14 billion Global Foundries semiconductor facility.  In his capacity as a State Association officer he also serves on a number of other ad hoc committees and is a liaison to the State Fire Council.  Tom is concurrently the 1st Vice President of the Association of Fire Districts of the Capital Area and author of the weekly Capital Bulletin.  He has served as 2nd Vice President of the Association liaison to the NYS Codes Coalition.  Everyone know his son Tony who travels with Linda and Tom, son TJ Jr. is a firefighter/paramedic with the Albany, NY fire department and daughter Jeanni who is a midwife and practices in St. Francis hospital in Midlothian, Virginia. (8/18) 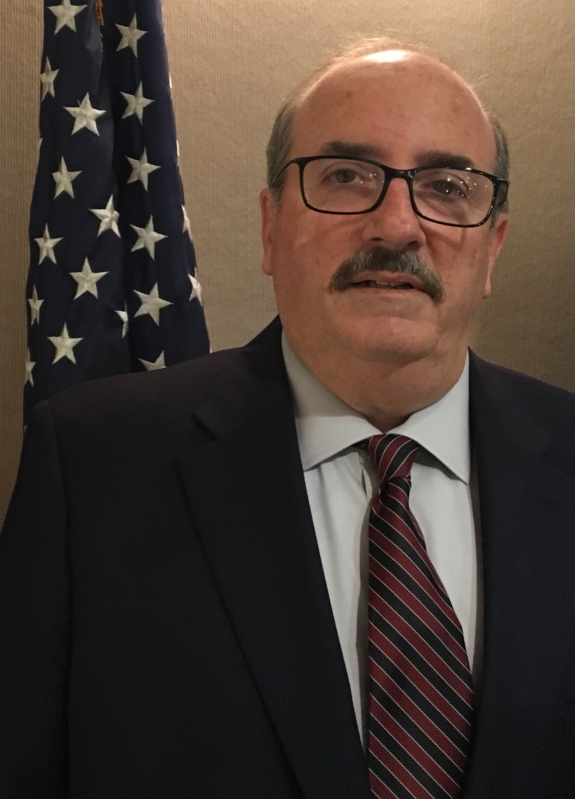